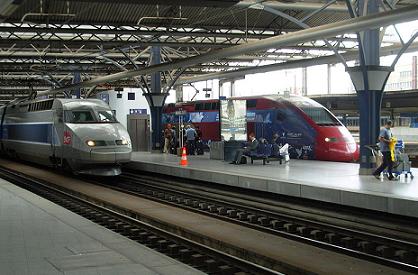 Brussels Airport has a terminus railway station in the basement of the terminal (-1). Passengers can go by train to stations in Brussels and several other cities in Belgium (such as Ghent, Liege, Hasselt, Aalst, Antwerp).

Central is an old station in the centre of the city. The station has a small capacity (6 tracks) but receives 140.000 passengers a day. Is has hourly trains to Antwerp, Ostend, Ghent, Leuven, Amsterdam, Luxembourg and Brussels Airport. Two metro lines (1 and 5) have a stop at Central Station.

The station is located in the Northern Quarter, the central business district of Brussels. The station has 200.000 passengers per week, mainly commuters. Brussels North has 12 platforms with trains to Brussels Midi, Antwerp Central Station, Ghent, Liege and Namur. International trains from Brussels Midi make a stop at the North Station. Many bus lines leave from Brussels North: regional buses, the express buses to the airport and international Euroline bus coaches.